Edge IoT devices, such as sensors, actuators, RFID tags, and beacons, are typically equipped with lead-acid batteries, where its need to recharge to make longer lifespan of battery. By 2025, the amount of battery-powered IoT devices predicted to reach 23 billion units worldwide.

To prevent battery drain, connected devices utilize energy-efficient communication technologies—i.e., Bluetooth 5 and MQTT—to send data to an IoT gateway or the cloud. Another way to extend battery life is to force idling devices into the sleep mode.

Nevertheless, batteries have a limited lifespan, which often prevents companies from deploying IoT solutions in remote and hard-to-access locations lacking power lines. Researchers are aiming to solve this problem with the help of energy harvesting.

Introduction to Energy Harvesting in IoT

Energy harvesting is the process of capturing energy from one or more renewable power sources—e.g., light, sound, heat, or movement—and converting it into electricity.

In IoT, the concept of energy harvesting revolves around micro-scale power generation (as opposed to wind turbines and solar power plants, which produce 4% of the energy consumed in the United States). To stay up and running, transducers should scavenge at least a few milliwatts of power from their surrounding environment on a regular basis. 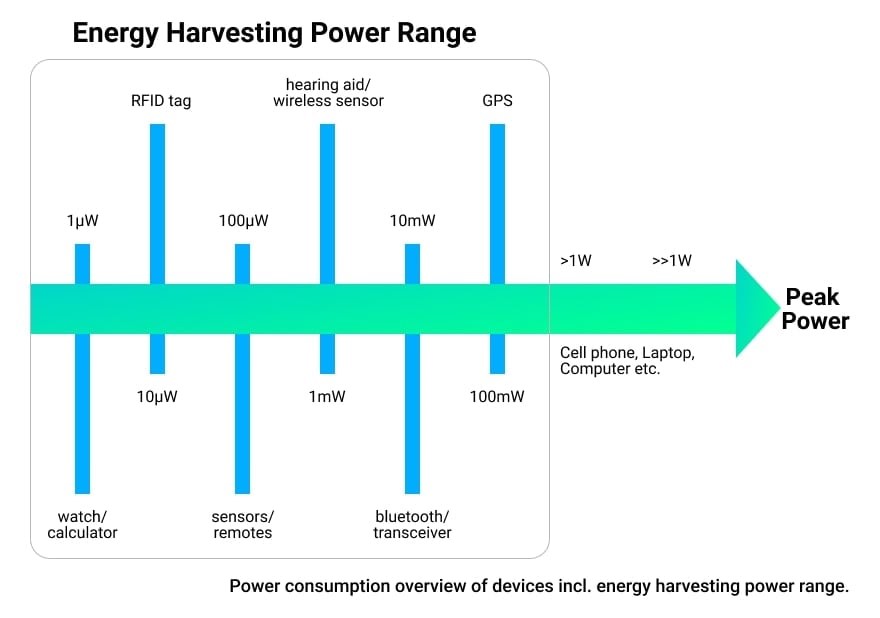 With energy harvesting, temperature and humidity sensors installed in a greenhouse can locally harness solar energy to operate indefinitely—and all without costly cabling and battery replacements. Similarly, smart fitness trackers can use the kinetic energy of an athlete to recharge themselves.

IoT vendors convert light—or solar radiation—into energy using photovoltaic cells, which can be used both indoors and outdoors. Multiple cells can be spread over an area to provide enough power for connected devices. The more light hits a cell, the more electricity it is able to produce.

When exposed to direct sunlight, solar cells can absorb over 130 thousand lux, which equals 1kW per square meter. In homes and offices, lighting levels vary within the range of 30-50 lux, which decreases power output to microwatts.

To solve this problem, a team of researchers from Uppsala University created dye-sensitized solar cells that harvest energy from indoor LED and fluorescent lamps. These cells can convert up to 34% of visible light into electricity, which can be accumulated and fed to miscellaneous sensors deployed in a building.

This technique involves accumulating energy through piezoelectric materials, which produce electricity in response to mechanical stimulation, such as vibration or movement. Powering sensor devices with kinetic energy can be a game-changer for various industries, including utilities, industrial manufacturing, and consumer electronics.

Researchers from UK-based Cranfield University are deploying kinetic energy harvesting systems at offshore wind farms. The scientists convert the almost constant vibrations of the wind turbine structure into electricity, which then flows into erosion detection sensors installed on the seabed around the base of the turbine.

Another example comes from the American Institute of Physics. Last year, a team led by Professor Wei-Hsin Liao published a research paper describing a portable energy harvester that can be attached to a person’s knee. The gadget can produce up to 1.6 microwatts of power while the person walks—and this is just enough to charge wearable devices like GPS trackers and health monitoring equipment.

Thermal energy harvesting is considered one of the most promising technologies for increasing energy efficiency in industrial processes. Today, more than 30% of the energy generated by industrial companies is lost through waste heat.

Some examples of thermal energy harvesting solutions include microcontrollers, sensors, and interface circuits developed by e-peas, a Belgian startup that raised €8 million in funding earlier this year.

Things to Consider When Implementing Energy Harvesting Techniques in IoT

As the Internet of Things is becoming ubiquitous, chances are the market will soon be awash in edge devices that use similar microcontrollers and SoCs. This would give IoT vendors an opportunity to integrate energy harvesting modules into the hardware components by default. Given that the global energy harvesting market topped $440.39 million last year and is currently growing at a CAGR of 10.91%, this assumption does not sound unrealistic.